During his keynote presentation at INBOUND 2018, HubSpot’s CEO and co-founder Brian Halligan officially “retired” a concept integral to marketing and sales teams everywhere: The funnel. You know, this guy:

For those of us in the audience, his announcement came as a surprise. Why get of rid of an idea that has worked for so many and for so long? Well, in Halligan’s opinion, there are cracks in the model. Heading into 2019 and 2020, companies will need a new growth model to help them succeed.

The funnel’s replacement? The flywheel. It looks like this: 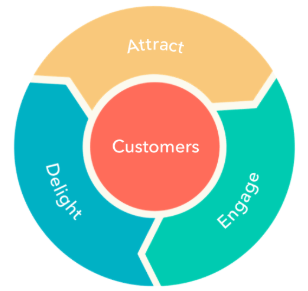 While it’s unlikely that the idea of the funnel will disappear just because one company has declared that it’s time to move on, Halligan did make some compelling points in favor of his new model. And that means it is pretty likely you’ll hear more and more about the flywheel in the coming months. To help you stay ahead of the game, here’s everything you need to know about the flywheel’s launch at INBOUND.

The flywheel is a new growth model that treats customers as an input — not an output.

According to Halligan, there have been two main issues with the funnel model over the last several years. The first is the fact that people no longer trust marketers and sales reps as much as they used to, leading to decreased influence for those roles across the buying cycle. Who do customers trust instead? Each other. Statistics show that 92% of buyers trust referrals from people they know, while only 3% trust sales reps.

The other main issue with the funnel is how it forces companies to start fresh at the beginning of each quarter. Over the span of three months, marketing and sales teams do everything they can to fill the funnel with leads and convert them into customers. They give it all they’ve got — and then they have to start again. There’s no momentum that carries over into the next quarter.

Together, these issues point to a larger problem: The funnel is a model that treats customers as an output, rather than an input. Marketing and sales teams are expected to work together to attract potential customers and close deals, but where does word-of-mouth fit in? It’s true that some leads may come as a result of referrals, but the funnel wasn’t designed to maximize those cases.

The flywheel, on the other hand, was designed with referrals in mind. By delighting customers, you’ll turn them into brand ambassadors who will then tell their friends and family about how great your company’s product or service is. As a result, those people will also seek out your company. And if you’re ready to delight them with content that answers their questions and a service-oriented approach that helps them solve problems and satisfy needs — well, you’ll earn more brand ambassadors. It’s a cycle that leads to growth.

To make the flywheel work, you need to do three things.

To make the flywheel spin, you need to apply a force. And — as I hinted at above — that force is delight. By delighting customers, you’ll earn more referrals, and that will keep the flywheel spinning. But don’t make the mistake of believing this is only a job for your customer service team. As Halligan emphasized, your entire organization needs to make it a focus. That means your marketing team’s job isn’t to attract leads; it’s to delight prospects. And sales reps? Their job isn’t to close deals. Again, it’s to delight.

To keep your flywheel spinning for as long as possible, you’ll need to remove as much friction from the equation as you can — it’s simple physics. In practice, that means you’ll want to make it as easy as possible for customers to buy your product or service. To accomplish this, Halligan recommends deploying an “80/20 rule” across three key areas:

Lofty goals, no doubt, but sticking to these ratios will contribute to a “lighter” customer experience and increase your chances at creating delight.

Because numbers one and two are designed to generate growth, number three on this list of requirements is a safeguard to make sure your company can actually handle that growth. Are your processes and technologies ready to support more customers, greater revenue and new hires? If they aren’t, you’ll likely end up negating any momentum your flywheel was able to build. If people are ready to buy and you aren’t ready to sell to them, they’re going to take their business elsewhere.

All right, there you have it — that’s what we’ve learned about HubSpot’s new flywheel model. Now we want to hear your thoughts. Are you ready to abandon the funnel? Let us know in the comments.